Emperor Tang Xuan Zong 唐玄宗 was beaming with pride as the last bricks at Xing Qing Palace were laid. Just before he moved in, he decided to consult his geomancer for an auspicious date to move into his new palace. After surveying the palace, the geomancer shook his head.

“Something is missing in this palace.” replied the geomancer.

“My new palace has every feature and amenity that an emperor could ask for. What could be missing?”

“A dragon pool.” replied the geomancer.

The geomancer laid out the specifications for the “pool”. It was more like a circular lake, surrounded by willow trees and measuring some 18,000 square metres in area. It sat right in the centre of the garden at the southern end of the palace. In the lake were lotus blossoms. On the southern shore of the lake, a special herb that could treat hangovers was planted. According to legend, the drunk person only had to smell the herb to get detoxicated. Whether the herb smelled exceptionally good or exceptionally bad, this had to be an exaggeration by some privileged poet recounting his experience to an awed-struck audience.

Addicted to sensual pleasures, Tang Xuan Zong would sail on Dragon Pool with a bevy of beauties whenever he had time to kill. Sometimes, he would invite his mandarins to wine and dine there. Some of these parties lasted for days. Drunk poets came up with surreal descriptions of the pool, making it a heavenly mystery for the commoners out there. 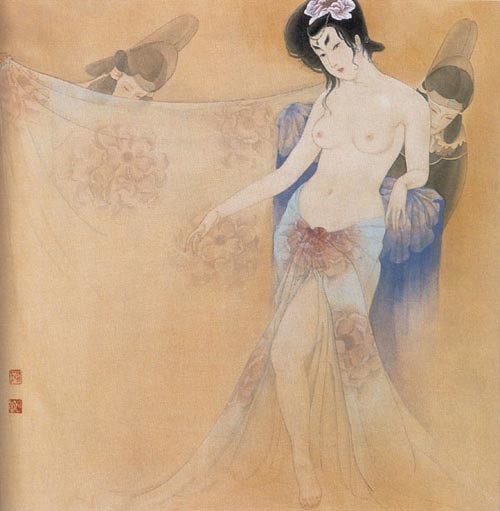 On the eastern shore of the pool, is a pavilion which Tang Xuan Zong had specially built for a woman he fell madly in love with. It was no Taj Mahal, but the structure was embedded in a sea of her favourite flowers. The lucky girl was none other than Yang Yu Huan 杨玉环, his daughter-in-law! In 733, fourteen-year-old Yang Yuhuan married Li Mao, the Prince of Shou and the son of Emperor Xuan Zong. To bypass various moral issues, the Emperor made Yang Yu Huan a nun, separating her from his son. He then bestowed a new wife upon his son before he took Yang out of the nunnery, effectively giving her a brand new identity. She became Yang Gui Fei – his concubine.

One day, as Tang Xuan Zong was enjoying the scenery at Dragon Pool with Yang Gui Fei in his bosom and a goblet of wine in his hand, he called his guards to summon the great poet Li Bai. Li Bai was brought into the palace, so drunk that he could hardly stand on his own feet. The emperor asked Li Bai to compose a poem that captured that beautiful moment at Dragon Pool. Li Bai wrote: