Scars That Heal With Tattoos

Many people frown upon tattoos as fads which impulsive and immature individuals pursue to show others how cool they are. But behind every tattoo is a different story. 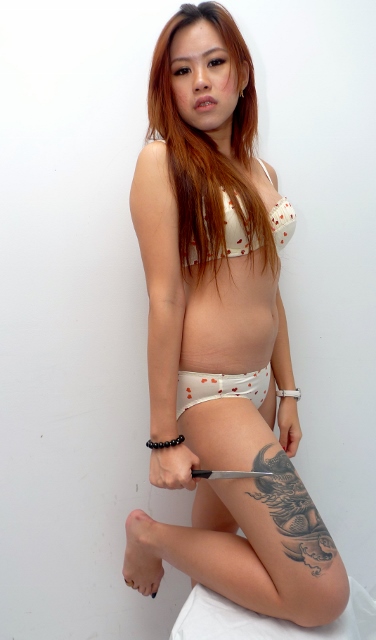 Fon slashed and stabbed her thigh when she was suffering from depression. She later decided to cover up the scars with a tattoo. But why a tattoo, I asked her. Wouldn’t a tattoo draw more attention than skin-toned scars? She had no explanation, but I guess I can answer that for her. Scars may need an explanation. Tattoos don’t.

For more on our insights into tattoos, check out our book, Leaving The Pain Behind.

This tattoo is “huge” in the sense that it’s rather extensive, but the design is pretty simple and probably won’t hold a candle to Nylon’s tattoo.

Unlike the Thai girl, Nylon is an intelligent and artistic woman with a story behind her tattoos. Come read all about it in our book, Leaving The Pain Behind.

Dewdrop Books – Fiction and non-fiction with a focus on the colourful and exotic Asian realm. Check out our titles.
Post by mrbrown.

Many foreigners, especially Britons were offended by General Prayuth’s candid and somewhat “insensitive” statements made in the wake of a double murder of a British couple at Koh Tao in Southern Thailand.

They’re like fallen leaves
Wrinkled and brittle
Ironed out
By the weight of the past.
Do be careful
When you turn the pages
Of my life
That now longs to be rewritten.

Lifeless
Is this windless night
The weary souls
Struggling against the web
Of city life
Are now cocooned in bed
Their dreams unread
Till the birth
Of another day.

I almost laughed when someone wrote RIP – Rest In Plastic when Joan Rivers finally kicked the bucket at the ripe old age of 81. And frankly, I’ve not known much about Joan Rivers beyond her hideous “plastic” face. Well, she was obviously a very self-conscious person terrified by aging. If she believes in rebirth, she must be happy at her dying moments that she can now hit the reset button and start anew. Her struggle to defy mother Nature has ended. The clinic which operated on her before she slipped into a coma and never woke up insisted that she was there for an endoscopy and not a cosmetic procedure.

Joan Rivers started her career on a somewhat serious note. When she interviewed Lucille Ball, she was not the funny one. But she later found her feet as a comedian and made a career out of unmentionable things. Her latest antic was probably calling President Obama gay and saying that his wife is transgender. Of course, Joan Rivers insisted that offending people was never her primary objective. Making people laugh and getting paid very well for it was. Whenever she caused an uproar, she once said: “Lighten the fuck up, these are jokes.”

Also famous for saying that she would do anything for money (including having sex with a centenarian) and pointing out that men wouldn’t lift up a woman’s dress to see if she has a library card, it’s curious that she should have disapproved of Miley Cyrus’ twerky antics recently. What sort of role model is there in showbiz? The old lady was confused.

Crossing the line is what Joan Rivers did for a living. Like many in the tough business of showbiz, Joan Rivers had her fair share of ups and downs. At her lowest point, her then husband committed suicide. Humour is not the only business Joan Rivers did. She was involved in retailing lifestyle products and published 7 books. The one that caught my attention was Men Are Stupid And They Like Big Boobs. When I last checked, one of her out-of-print books is going for over $100 a copy.

She crossed the line in every arena from comedy to plastic surgery and politics and yes, she was Jew. Born of Jewish parents from Russia, her original name was Joan Molinsky. The family name “Rivers” actually came from an agent by the name of Tony Rivers. Besides her comedies, Joan Rivers also wrote and directed movies. On stage, her self-deprecating humour made her look like a bimbo, but she was obviously a very talented and intelligent entertainer.

One group of men doodled a lot of nonsense after being left alone in an uninspiring room. Another group of men “inspired” by an attractive lady while waiting to show off their doodling skills performed a lot better. Any logical person can tell you that the experiment is flawed. Did the researcher make sure that all the men selected had the same standard of doodling to begin with? If they had picked me for the second group (and frankly, I’d rather be in the second group), I would have produced kindergarten drawings all the same.

Similarly, one group of women were tested for helpfulness when there was no man in the room. They turned out to be not very helpful. Then, another group of women was tested – this time with a couple of handsome, flirty guys in the room to chat them up. They helped the woman get her things into her car. What does that prove? Is that proof conclusive? I’m amazed that “experiments” like these are conducted for Discovery Channel. It’s all pretty much drama and not science.

The only objective observations were those measuring arousal and picturing it on the MRIs. Machines don’t lie. But how do people react when they are physically, sexually aroused? I can’t claim to be an expert, but it only takes someone with common sense and some life experience to realise that regardless of whether people are in love or in lust, they do irrational things like spending $1000 on roses and cleaning out bank accounts to pay for a wedding.

I have a feeling that women who attempt to keep their men from straying by telling them love stories are not going to be very successful. You don’t need a degree in psychology to know that men and women will go all out to impress. Men can also pretend to be caring and women will definitely put their best foot forward. When reality sets in, either responsibility takes over or the relationship is over.