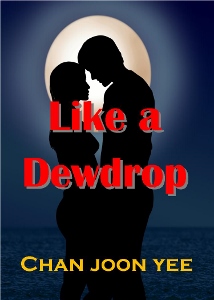 She was the daughter of a wealthy rice merchant. He was an orphan, a
writer who penned stories told to coolies at Boat Quay. Everything was
going against them, but they were in love. And till an untimely death
did they part. A tragic end.

29-year-old author Ted Wong was a publishing phenomenon, prospering from
writing by churning out literary trash. Then an accident occurs…

Enigmatic Beryl Tham slams into his life. So real yet so unreal, so
cynical yet so romantic, so sad yet so beautiful, she seemed like an
uncompleted story from a previous life, begging for a second chance.

Using every ounce of his literary skill, Ted desperately tries to steer this story from its tragic end.

After a near-death experience, successful author Ted Wong decides to write a story about the woman who drove her car into him. Before long, he finds himself inextricably drawn into the story, using every ounce of his literary skill to steer the story away from its tragic end. But why should he bother when she has nothing he wants in a woman. Why should she bother when he has nothing she wants in a man? Perhaps the explanation lies in their previous lives. Perhaps we are all repaying a karmic debt when we fall hopelessly in love.

Buy Book From Amazon (e-book only)